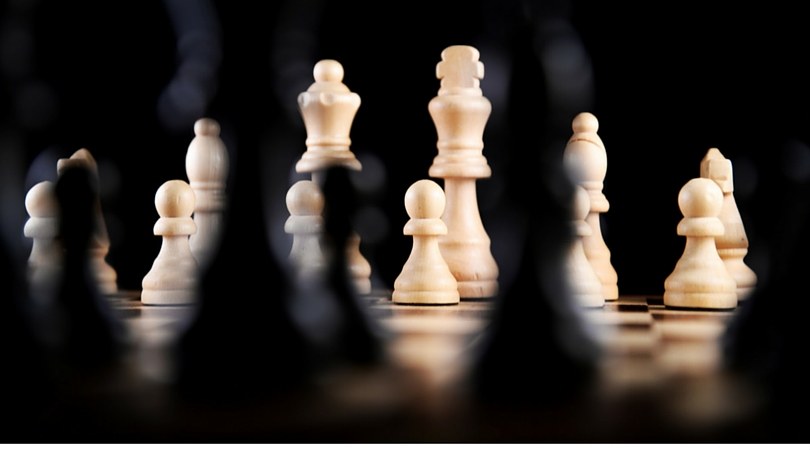 Yo! Did you get a haircut? Makes you look younger.

I wanted them so bad, I wanted to be the first kid in the neighborhood wearing them. And I was.

But after about a week of owning them, I decided I would rather have the money instead.

So, this Junior Ninja took a toothbrush and cleaned off the dirt a little bit and decided to post them up for sale on eBay. 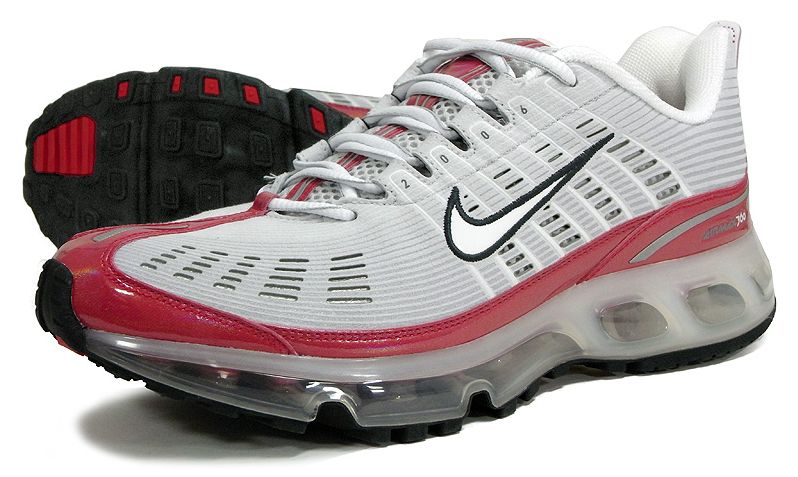 Now, most people automatically assume that they’d have to sell something new for a loss. So what stray thought led me to believe I could charge more? I have no idea; it may have been my first Flipping Ninja moment and so I posted them for a $40 profit. I just kind of… did it.

At the time my friend, who was four years older than me, said, “Dude you’re crazy, no one’s gonna buy them for $200 bucks.”

Now, some people might have listened, but then there’s that other kind of human. For some of us, when we get told that we can’t do something or our ideas or beliefs are ridiculous or crazy, it has the opposite effect. A put-down pushes me up. I will prove them wrong and re-validate my own confidence and decisions. That’s me. What do you do when your ideas are shot down?

First, I learned to check the source. Ask yourself, “Do I respect this person’s opinion?” If the answer’s ‘no’ then forget it. They might as well have told you, you were purple with green spots for all the cred they have. After that, you could have one of two reactions:

1. You absorb and accept what they say and retreat (which can be a huge mistake) or

2. You hear their criticism and consider it, but if you still feel good (ask your gut) about your idea, move forward and say, “I know what I’m doing, I trust myself, watch me make this happen.”

Guess what happened to those pricey shoes? They ended up in an eBay auction and sold for $223!

They had sold for $23 on top of my ask. I was 13 and had just made $63 over what I paid! I couldn’t believe it. AND you should have seen my friend’s face…he still doesn’t believe it.

YET despite the fact that they sold for $200+, he DIDN’T STOP telling me I was crazy. When I told him about my deals (I started buying and selling keyboards), he’d always react as if I was doing something wrong, scamming people or something. His logic couldn’t accept what flipping does. You buy, improve (even just with the words in the ad) and sell at profit.

Because of my ability to buy low, sell high, serve the market and give people what they want for what they’re willing to pay — he bashed me for it. It’s like… Bro! That’s what business is! That’s what companies, stores, malls — that’s what all of them do!

It’s about what the market is willing to pay for it.

So if the market is willing to pay you more for something, you’d take the higher price wouldn’t you?! Why wouldn’t you want to make more money?

In your flipping journey, be protective of your self-confidence around these kinds of people, and question any negative beliefs and mindsets. You’re not doing anything wrong. People are comparing deals on what you’re offering; they know what’s a good deal and what’s not.

So anyway — I go on to make more and more deals and he continued to needle at me because he himself was not capable of doing it! Today — we are still great friends and he knows how I roll with deals! :)

Believe In Yourself and Ad Magic! (The Chess Set They Said Was Impossible To Sell)

The reason I thought of that story is because not too long ago, I bought a chess set from Goodwill for $6.99. You know, a very basic wooden chess board with plastic pieces, nothing too big or fancy.

I did some marketing magic in the ad and I posted it up for sale. What you have to realize is that the power lies in the way you write the ad, how you take the photos, enhance them — every little detail counts. It’s all about perception.

So basically I took it upon myself as a challenge. In my head I basically said to myself, “Watch, I’m going to buy this chess set and I’m going to sell it for $100. I’ll make it happen.” When you’ve been flipping so many items and have gotten so good at it, it almost becomes a game you play!

So one of my friends comes over and sees the chessboard. I’m all confident, “I’m going to sell that for $100.”

He says, “Pfff, and what makes you think that’s worth $100? That’s insane, nobody’s going to buy it for that much.”

And I say, “Because that’s what I do, son! I sell things and I sell them hard.”

I know deep down I can sell it for $100. I have confidence in myself and I realize this is all just a game, a matter of perception. What the true value might be doesn’t matter at all. What matters is what someone is willing to pay for it. Don’t believe me, just watch!

Four days later I get a text about it from a guy.

He sends me a picture of HIS chessboard (pfff, his chessboard ain’t got nothin’ on mine) with $100 cash on top of it and he texted that he really wanted to buy my freaking chessboard. 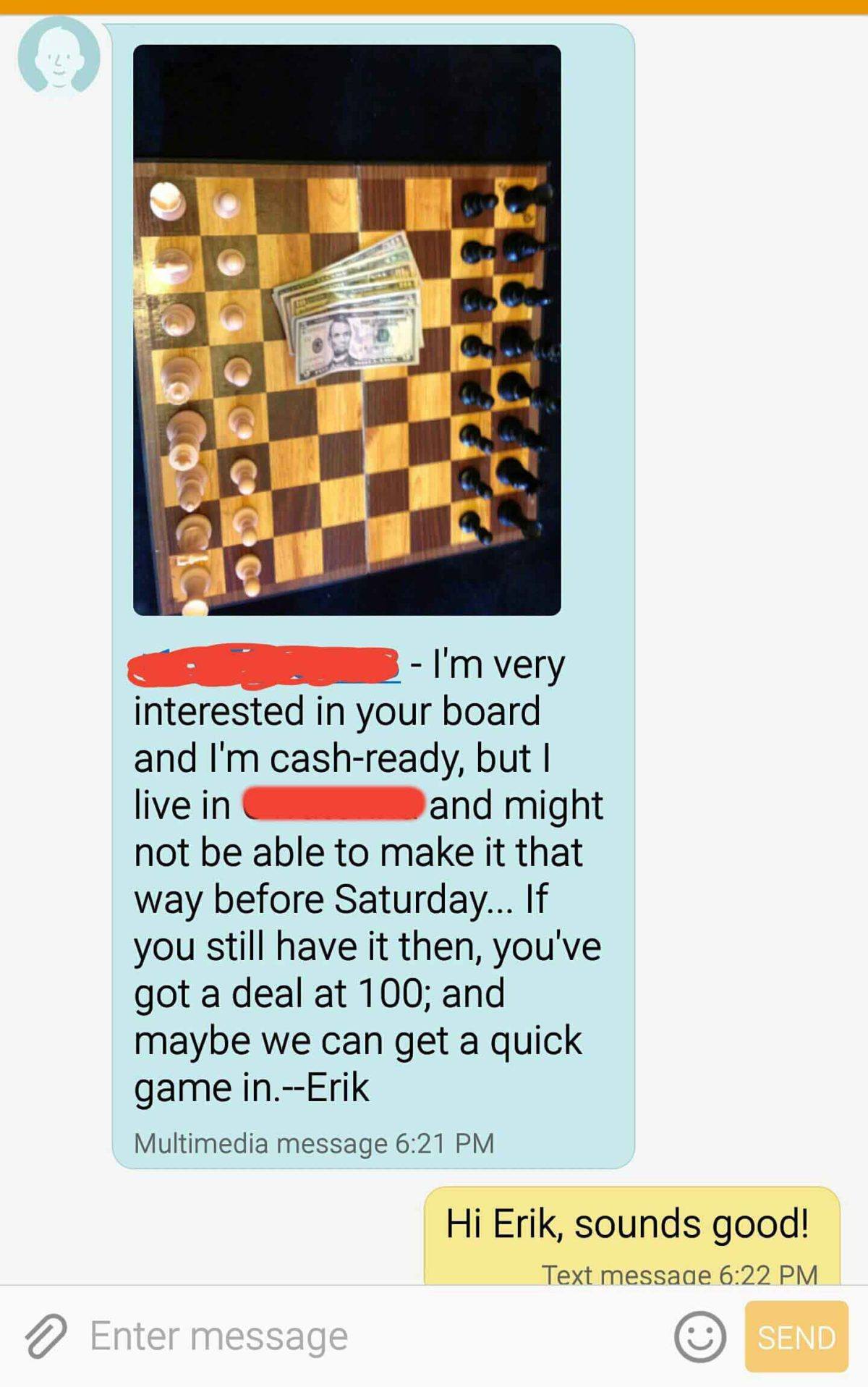 I sold him the chessboard for $100 the next day! Unfortunately I didn’t have time to play him — but here’s what he texted me days later: 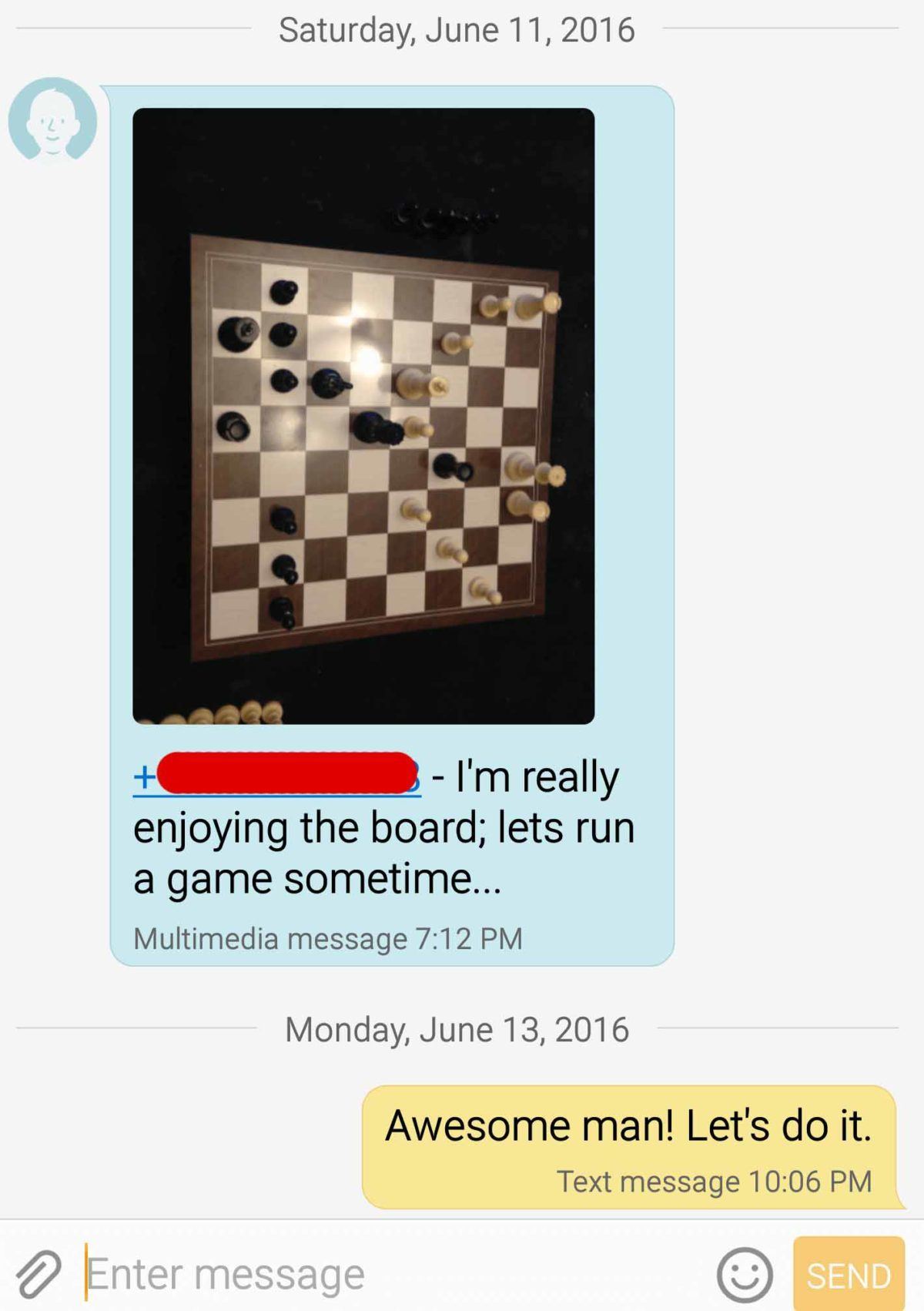 Take home lesson from this? Folks, you have to rid yourself of limiting beliefs when it comes to deals, buying, and selling. Don’t be afraid to ASK.

…And of course along with your ASK, you need some killer marketing.

You need to really SELL the product based on how people think and operate so that you can craft, tailor and enhance ads that target their emotions and perception using all the right conscious and subconscious “triggers”.

You also need to know how to write ads and take the proper photos that allow you to COMMAND whatever asking price you want.

A deal like this chess set isn’t uncommon at all, either. I literally just walked into a thrift store, bought the chess set and went home. Sold it for $100 bucks.

I share this with you to open your mind on the possibilities. Don’t ever be afraid to ask for what you want. I could have easily taken that chessboard and been like “Oh, $20 is a good price for it, here’s a chessboard for $20 bucks.” Blahhh. Mehhh.

But it’s like, no dude, I’m going to play OFFENSE and sell this bad boy for $100. Always try and prove YOURSELF wrong. If you ever have a doubt about something or feel that something won’t sell, or an item you find may not be profitable, challenge yourself. Tell yourself; “Watch me do it. I’ll do it anyway. I’ll make it happen. I’m a got-damn Flippin’ Ninja!”

Plus, thing is, even if it sits on the market for a while, it doesn’t matter because you can still enjoy and use that product while you wait in many cases — for example that chess set took just under a week to sell, so during that week I still enjoyed the chess set and played until it finally sold.

To wrap this up, here are two of the many photos I had posted up in my ad of this chess set.

There’s an art to taking photos and enhancing them in such a way that hits people subconsciously and gets them emotionally attached to the item (oftentimes without even consciously realizing it). Every little detail counts. That’s what marketing is all about. What do you think? 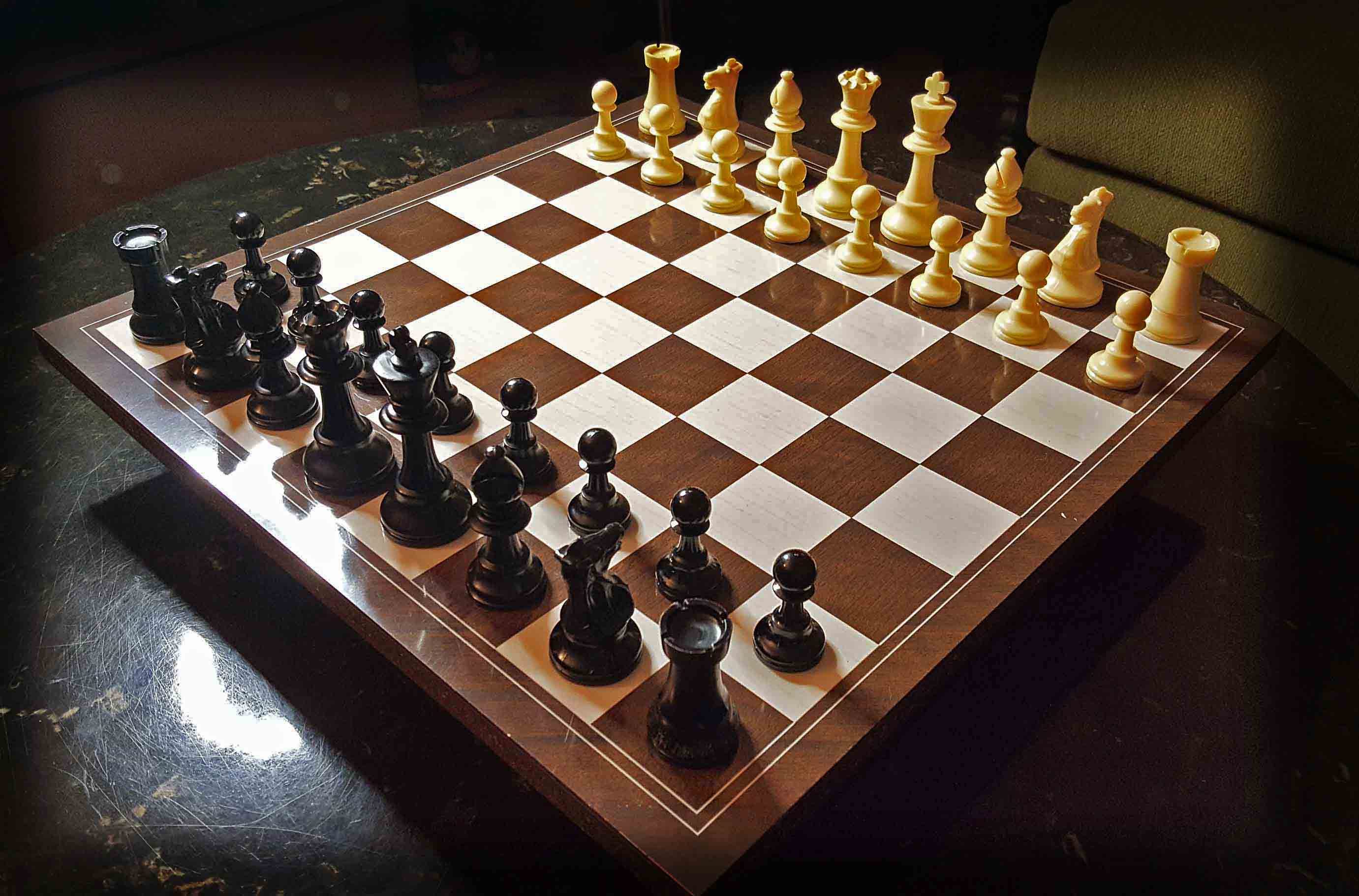 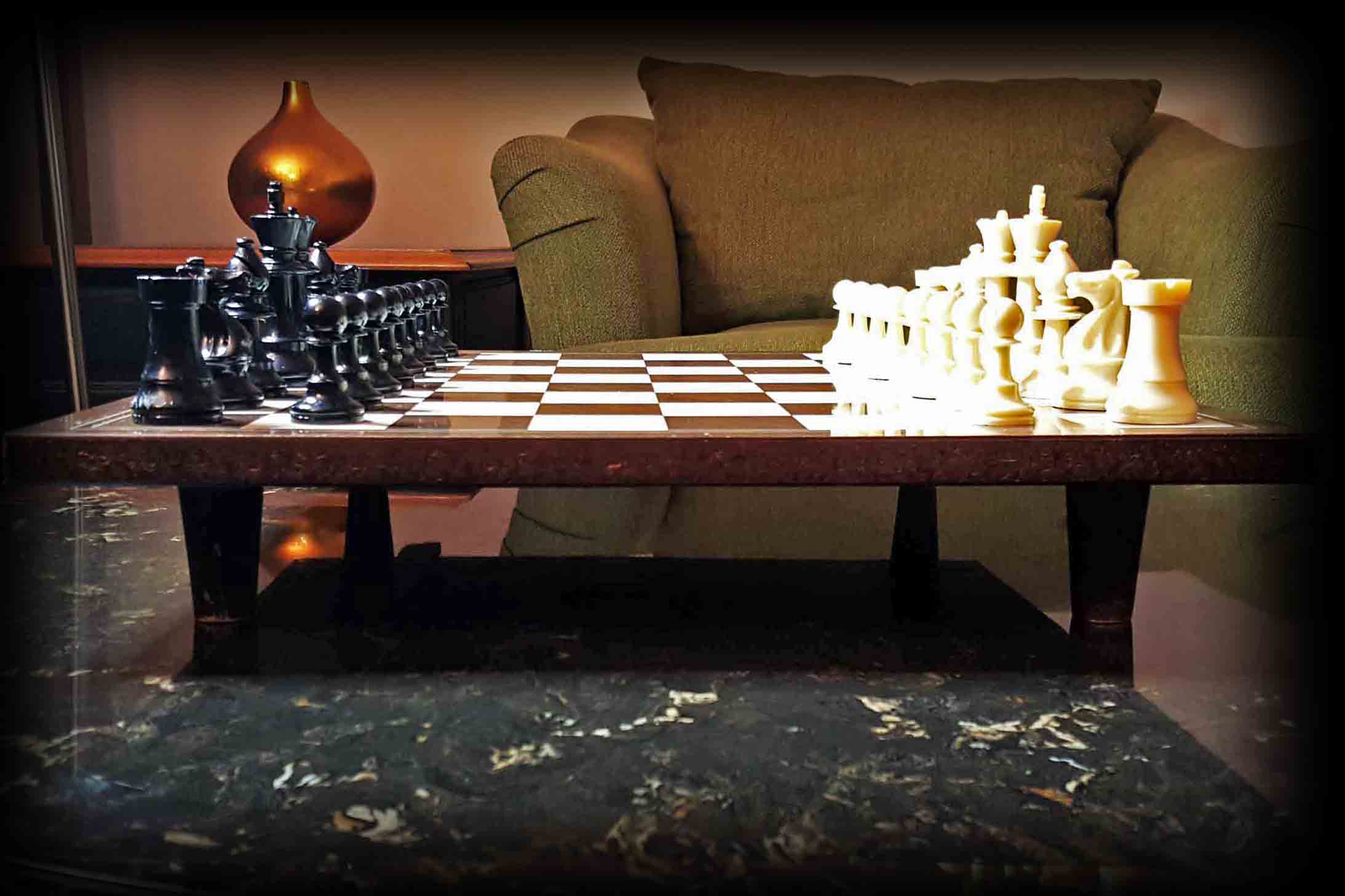 Now compare these with this other Craigslist ad for a chess set: 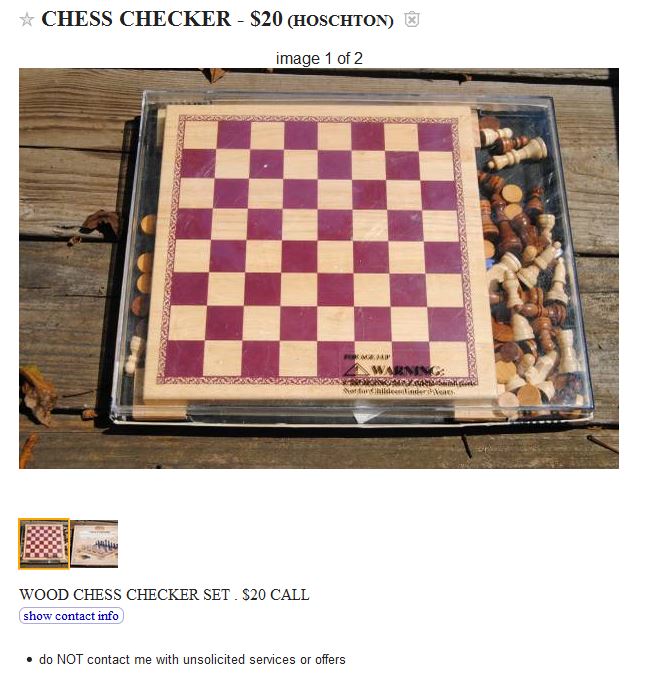 I’m willing to bet this person could have demanded a higher asking price with a few tweaks in his ad description and photos. Why not try $100, sounds crazy, right? That’s the point, as Flipping Ninjas we want to train you to think this way… confident and HIGH profits.

If the seller above had taken just 10 extra minutes tops to add magic to his add, he could have asked for more. This begs the question, is 10 additional minutes of your time worth an extra $80 in your pocket?