How Much Money Can YOU Make Through Flipping? 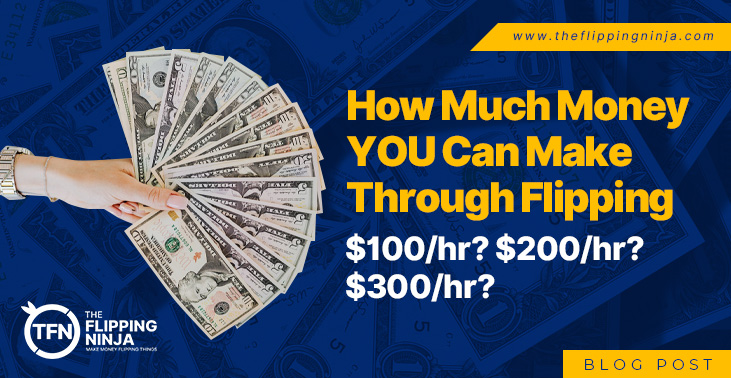 Flipping is simple. Buy low, sell high. It is a very lucrative sideline, or even a full-time job, if you know how to do it right. I flip things for a living and people keep asking me how much one can make just flipping things.

I’ve made six figure sales in a year all from flipping. Here’s what I know…

The money you’ll make through flipping depends on three things:

On The Subject Of Time

Time plays a role as well.

You’re probably working, attending school, or parenting so you don’t exactly have all the time in the world. It’s only natural. But the good news is, flipping isn’t a time-intensive job.

Doing ten to twenty hours a week of flipping, is generally enough to earn you a good side-income cash flow of anywhere from $500 to $3,000 per month or more. Time is not the most important factor. Yes it’s required, but the three things I mentioned earlier are the main factors that will drive your profits up.

The more you improve those factors, the more profit you’ll get. Time isn’t the best metric for measuring how much money you get. Although it is a good indicator for your efficiency. If the work you put in today is less than yesterday while getting the same amount of profit, then you’re a much better flipper.

When I started, it took me 2 to 3 months of half-assing a few hours a week to get to $500/month. Once I reached that threshold, I realized it could be done. I was motivated. It was a steady increase after that. Knowing what I know now, it’s ridiculously easy. In fact, I was never the same after that.

There’ve been tons of times when I earned over 1k with 45 mins of work. I’ve literally gone into a thrift store, spent 15 mins buying cheap things, then gone out knowing I’ve earned over $700.

I’ve never spent more than 20 hours a week doing the work. Actually, that’s a lie. There was one time I went totally crazy and might’ve hit 25 hours working: buying, storing, taking photos, writing ads, selling – the whole flipping thing. It was a mess, and I was a total flipping junky at that time.

Outside of that, I’ve made over 100k in a year just from flipping. And I rarely worked over 20 hours a week on flipping.

I know one guy who makes over $100,000 a year strictly selling things on eBay. He works in the comforts of his home only going out when he wants to and when he needs to receive or ship an item.

He’s been at it for years, of course. And he’s placed an effective system around his work so he is efficient, and I must say, it’s very impressive. It’s not easy to reach that goal. But it is possible.

All in all, when it comes to making money flipping things, it’s a simple business model that is profitable and anyone can do. It’s not rocket science, and don’t let anybody tell you it is. You can go from “I’ve never flipped a thing in my life” to “holy shit I just made $500” in a week.

It’s not a get-rich-quick scheme by any means, and it does take work and energy, just as anything worthwhile does. But once you make a decision and say “I’m gonna give this flipping thing a shot”, your income may change very quickly.

If you’re interested in learning the nuances and principles that can quickly get you there vs spending months or years going at it alone, I have a course that’ll guide you to that goal and quickly get you up to speed, so that you can go out and become a world-class, money-making, Flipping Ninja. My goal when creating the course was to make people money, simple as that. So if this is something you’re interested in, make sure to check it out now while there’s a special promotion going on.