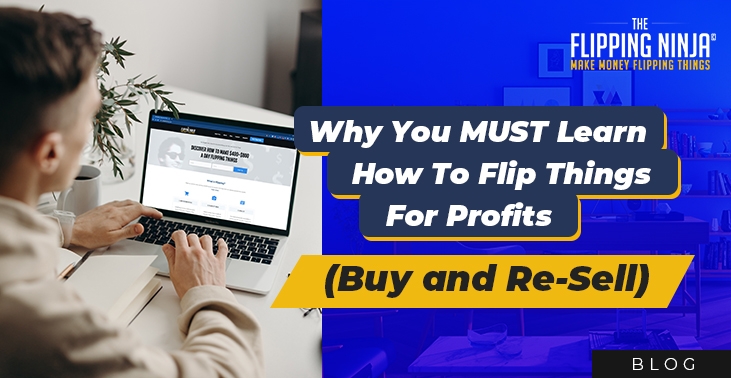 I remember there was this laptop I wanted. Back then laptops were WAYYY more expensive in general. This one was super basic, yet it was $680 (today, I’d probably have to PAY someone to take that laptop from me lol.)

Guess how long I had to work to save up for it?

6 weeks of working 25 hours per week.

That ‘feeling like a king’ feeling didn’t last long after I realized how much I was busting my ass off for peanuts.

I’m telling you that story so I could tell you this:

Discovering Flipping Will Change Everything For You

Throughout your life you’ll likely be working a bunch of different jobs or career paths. Whether hourly or salary. That’s totally normal.

HOW MUCH you make isn’t relevant here… For example, I’ve gone from working jobs that paid $7k/year (my first ice cream job) to $35k/year, to $60k/year – and one thing has remained the same:

Flipping stands on its own.

It’s a skill set that once you learn, you’ve got 100% flexibility and control, unlike your day job where there are limits & rules like having to punch in at the same exact time each day, making the same amount of money each week, etc.

When you’re out there flipping items for profit – you can do it as much as you want or as little as you want – and come out profitable every single time.

That $680 laptop I wanted when I was 16 I could have gotten with just a couple flips – and in a WEEKEND rather than 6 weeks of working 25 hours/week. Like holy shit. Just thinking about it makes me wanna punch a kitten.

But that brings me to you.

You Deserve To Know How To Do This… Well.

You don’t have to be extreme and go out and make $30,000+ flipping things on your spare time like I did (although it does get addicting once you do it a couple times and see how easy it is…)

What if you just wanted to make an extra $200 bucks so you can party it up this weekend or treat you and your mate to a fancy night on the town — fully paid for?

Or what if you wanted to buy yourself that nice luxury watch you’ve been eyeing or hit Macy’s and get all new threads?

See, it’s not about the specifics of how much you make or what you do with it (actually, that IS important – but I want you to get a different perspective here).

It’s about KNOWING the skills, so that you can call upon them anytime you want. For whatever reason.

Let me give you a better example of the THINKING behind it all.

I know that I can walk into any thrift store, and make anywhere from $50 – $300 in about 20 minutes — guaranteed (sometimes even more).

Let’s say I wanna do something totally random… or buy something I really want. Doesn’t really matter WHAT. Let’s just say that:

So here’s the thinking…

“Hmmm… I want to buy this fancy new gadget for myself that costs $200… Instead of buying it outright for $200 bucks, I’m going to “spend” 20 minutes of my time “getting” it (via flipping things).”

Let’s say you were driving your car and suddenly it broke down on you. You’re worried as hell and paranoid. What if it’s an expensive fix?

You take it to the mechanic and they check it out. Turns out it’s going to need a $600 repair.

What do you do?

Obviously — if you want to drive it — you pay for it, right? Right.

But… (and here’s where the thinking comes in)… You think to yourself,

“I want to recoup that $600. I was NOT planning on that. I really needed that money.”

Easy. You decide on your way home, you’re going to stop at a thrift store or jump on Craigslist and do a few flips and BAM — your $600 car expense?

The only thing you “spent” was your time. You found and flipped 4 items. Total, you pulled it off in about 2 hours (yet it didn’t even feel like “work” because you had so much fun and flexibility doing it).

And think about this… if you told some of your friends or family you were making that kind of money so easily… what would they think?

It’s usually one of a few things.

I’ll be straight with you. Most people will watch you make crazy amounts of money on your spare time flipping things. But they’ll never take a shot at it themselves. Why? Not sure. Maybe it’s a psychological thing. Or a self-doubt, “I can’t do that” type of thing. Or laziness maybe? Who knows.

But one thing is for sure:

Just like learning how to drive. Everyone learns to drive. Yet, believe it or not, there are a lot of people out there who don’t. Might be because they’re college campus students who don’t have a need… or maybe they use public transportation… or perhaps they live lifestyles that simply don’t require driving a car…

Yet one thing remains… almost everyone still KNOWS how to drive, if they had to.

You don’t HAVE to take an epic, unforgettable road trip from New York to California… but you CAN if you wanted, right?

Because you know how to drive.

Doesn’t mean you’ll be taking awesome road trips left and right… nor do you have to.

And if you wanted to go big and drive across America suddenly — you CAN!

Catch my point? That’s what learning how to flip things for profit is like. 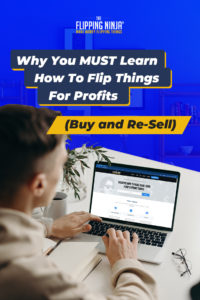 It’s All About Giving You Control And Power

What you do with those flipping skills is really up to you. How much you make, that’s your business.

My friend Shawn flipped stuff on Craigslist to paid off his credit card. He didn’t really do too much after that.

I’ve used these skills for things as small as getting tons of FREE books (I’m a big reader… but hate reading)… to much bigger things like making several thousand dollars in a few months to use as down payment cash to buy my first house.

Do you see where I’m going with this? You NEED to learn this stuff, and develop these “superpowers” so that they’re on hand and available for you to use anytime you want – to make your life better.

Learning how to buy, sell, flip, and market is a skill set that will serve you for the rest of your life in any environment or economic condition you’re in. Meaning you’re never going to be dependent. You become your own asset.

YOU become the most valuable thing at that point. Your skill set and your mind, because you can produce in any environment.

You can produce on your own and you are “your own boss” because you’re directly serving the market’s needs.

You’re not stuck in a box doing specific, robotic tasks day in and day out. You’re out there and you have the power to serve the market and there’s no ceiling to what you can do and how much you can make.

So once you invest in yourself and learn these skill sets… BECAUSE you now have the skill sets, you can basically go in any environment and find out the market’s needs, fulfill them, and make a living — or even make a fortune.

And that determines what you can end up doing in this business.

You can do big things… or you can do small things.

Now the choice is yours.

What will you do?