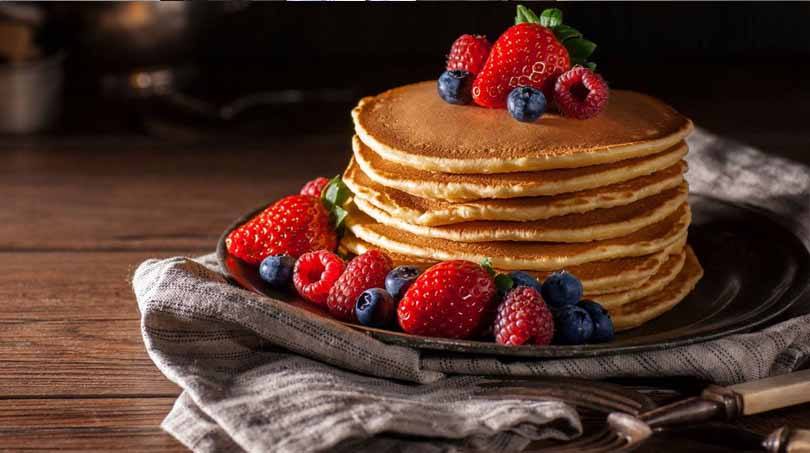 For the first time in my life… I successfully made pancakes.

The only other time I tried making pancakes was years ago.

The pancakes ended up cooking on the front and back…

Nothin’ but dough. Mushy in the middle.

I gave up after one shot.

So what happened was…

Since then… I never believed that I could make pancakes… (as funny and as weird as that sounds).

I don’t know. Didn’t know what was preventing me.

It was a belief that I had… and I never tried it again.

The other day, my friend came over and made pancakes for the first time at my place.

And I ate them and they were amazing.

As I was watching her… it looked so easy.

Basically she said just add water, here’s what you do… etc.

So the next morning after I woke up, I strolled to my kitchen and…

I tried to make pancakes.

I thought okay… well she made it yesterday… and I kinda saw… maybe I could pull it off too.

And I freakin did.

I basically did it and it was so easy and it worked.

I faced it, and I just took a shot at it.

And it was successful, and I had the best pancakes ever.

So… the lesson learned here…

Is that sometimes in life, there are certain that you might have limiting beliefs on… you know?

As lame or weird as that sounds… I couldn’t make pancakes. Or enjoy protein pancakes.

And I couldn’t do it for years.

Because of that one time I tried it, I failed at it, I believed that I could never do it again.

So I never did.

While I watched others around me doing it.

So finally, someone showed me.

I saw someone do it again and I made a decision I said you know what?

My point is… with a lot of things in life, you might try it alone.

Now… when you fail, understand that that’s normal.

That’s part of the process.

Failing is part of the process and is completely normal.

With that being said, often times either you try again…

Or you find somebody (like a mentor) or find someone who’s already doing it, watch them and take their lead… And then try it again.

Keep going at it.

The point is eventually…

You’ll get it down.

Now making some serious bank flipping things can be the same thing for you.

At first you might have no idea of what you’re doing… You read some instructions on it, you try it… you fail miserably and either 2 things happen:

I didn’t face pancakes for 9 years.

Took me 9 years of self-limiting beliefs and self-doubt.

It was only until someone else came into the picture and I saw how easy it was.

And I saw that it was working.

And that’s actually when I went at it again. I had the confidence.

Know that that’s normal… that’s part of the process… and that’s ok.

But it’s NOT okay if you stop and let it stop you for the rest of your life.

How good your life can be once you learn the skillset of flipping things for profits on your spare time.

Imagine a flow of money suddenly opening up in your life (and you are in complete control).

Pancakes are good and all…

But having another income stream… is freakin’ epic if you ask me.

Expect failure and for it to be hard and different…

But eventually you’ll nail it.

And you’ll enjoy the benefits.

Or fund a vacation this year…

Or if you already work and you just want a second income stream… You know, you wanna make some money on the side, create a little side hustle…

What you do with the money you make once you learn how to flip things for profits — that’s completely up to you.

How MUCH you make once you learn what I teach — that’s completely up to you as well.

I started flipping things on the side outside of my full-time day job with only a couple hours per week… I was making $2,700/month (that’s over $30,000 in profits per year)…

And it all starts from that decision.

That decision to not give up and to keep moving forward with it.

And limiting beliefs and self-doubt…

If you’re having trouble…

Find somebody who’s already done it.

And have them mentor you or learn from them.

The smartest thing you can do is find somebody who’s already done it, and learn directly from them.

My Flipping Ninja Blueprint is just that.

If you’ve ever tried flipping things on your own…

Try it while you’re backed by somebody who’s done it.

And somebody who can teach you.