Flip of the Week: “$550 Dollars… While Lying In Bed On My Phone… Fast Money From The Comfort Of My Own Home”… Roland RD-300S Digital Piano Package + Amps + Extras 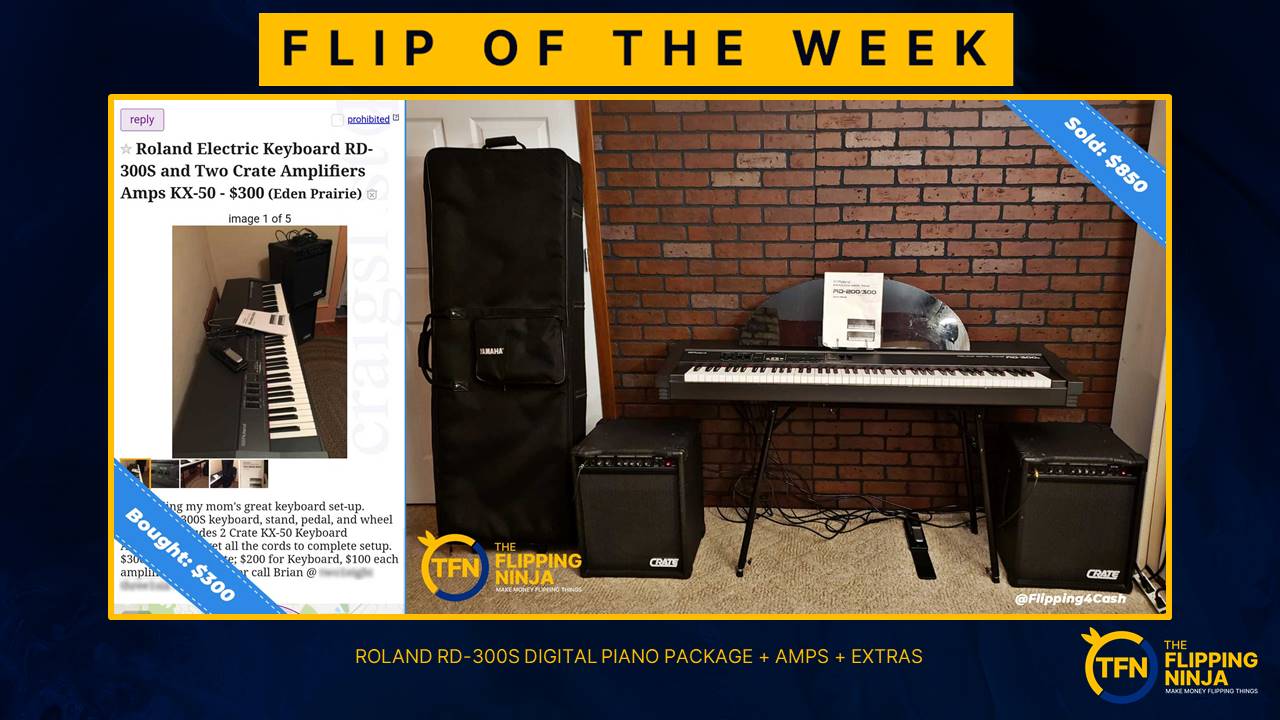 I don’t think anyone loves flipping keyboards more than yours truly.

The best decision I ever made in my life was accidentally flipping my first keyboard over a decade ago and making a measly $20 bucks on it.

Even to this day, anytime I flip a keyboard, it takes me back to my roots. The early days when this cat was just starting.

So what’s the difference between back then and today?

Well… this week’s Flip of the Week I made $550 on one keyboard flip… All while lying in bed browsing Craigslist from my phone.

Pay attention, because this flip has a lot to offer.

I came across this ad on Craigslist. Someone was selling their Roland keyboard PLUS 2 amps for $300.

Here’s a screenshot to their Craigslist ad and pictures:

Pretty basic. Not bad. But not the best either.

And definitely not up to par with The Flipping Ninja’s standards.

When I sell something, I wanna make the most amount of money on it in the least amount of time.

How do we do that?

What’s the first thing you notice about this ad?

Well… I don’t know about you…

But their picture sucks balls. 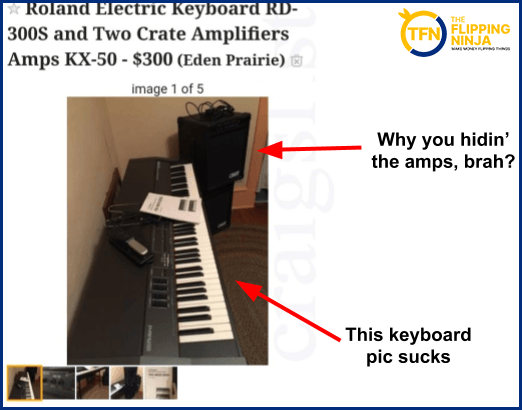 Super basic and barely shows the keyboard in its full glory.

Not to mention, this deal comes with TWO FRIGGIN AMPS!!! And they’re totally just low key hiding in the background.

Sucky Thing #1: The keyboard pic itself sucks (especially as the ad’s display pic)
Sucky Thing #2: The amps are hard to see/barely visible unless you’re looking up close. Not good.

Oh and to add salt to the wound… sucky thing #1 & sucky thing #2 from above combined into 1 photo… AND IT’S THE MAIN DISPLAY PIC USED IN THE AD!

Photos are EVERYTHING when it comes to making money flipping things.

Taking photos that sell is both an art and a science.

It’s a skill that’s learnable. And it’s one of the pillars I teach when it comes to making money flipping things.

But don’t worry… the fact that this ad has crappy photos is a GOOD thing. That’s because YOU (and I) can snag the item, simply take better pics, and by just that alone make MORE money. Yup. Learning how to take photos that sell will multiply your profits…

I mean not bad… But not good. Just basic. Could be better.

When it comes to ad descriptions when you’re selling or flipping stuff — it boils down to this:

The words you use in your ad description can make the difference between getting $300 on an item… and getting $850 on that same item.

I went and picked up this keyboard package for $300 as fast as I could.

I took it home, took killer pics of everything (I mean pictures that really sell… things like showing the item in its full glory, really positioning it as a PACKAGE).

See, thing is if I was JUST selling a keyboard, that’d be one thing.

But if I was selling a keyboard, 2 amps, a stand, a wheel bag, and whatever else with comes with… now it becomes a PACKAGE.

So there’s a golden lesson for you on writing ads that sell: Simply adding the word “PACKAGE” can allow you to increase your asking price, AND sell the item faster (everyone wants PACKAGES… a “PACKAGE DEAL”… a “FULL PACKAGE”… etc.)

Heck even in dating… You don’t want someone with just one or two cool things about them… You want the FULL PACKAGE!!!

So back to the flip, here’s what happened:

Here’s a screenshot of my ad for the keyboard… read it, study it, internalize it… look at the layout… the selling points… the spacing between lines even and the visual aspect… it’s a fun read and keeps you engaged, no big, long blocks of long boring text like most people have.

Notice how I leave no stone unturned in my ad.

And so much more.

4. Re-posted it for sale and ended up selling just 3 days later for…

Spent maybe an hour on that flip – that’s basically $550 an hour if we broke it down into an hourly rate.

What could you do with that kind of money – if you earned $550 an hour.

How about a badass cruise with your loved ones?
All from one flip 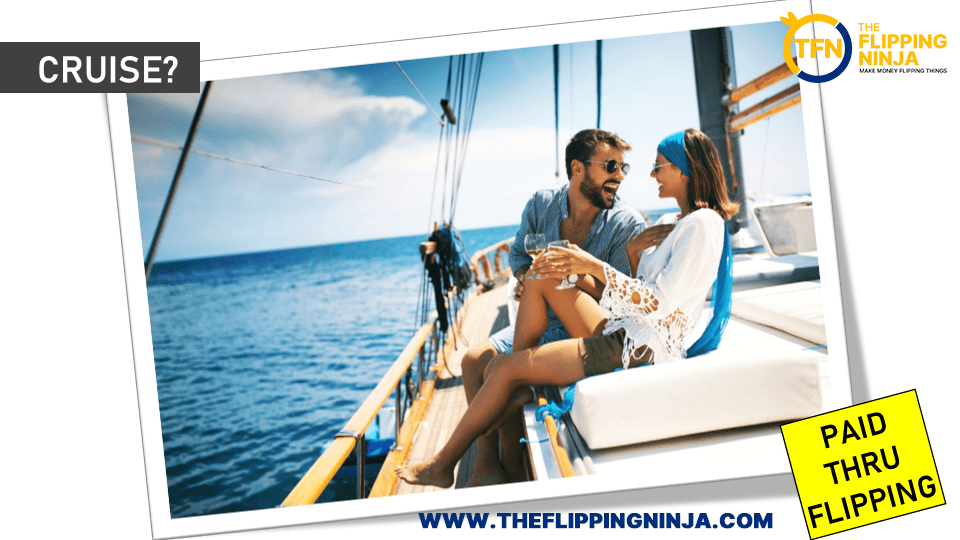 Or how about taking your whole family of 9 people to Disneyland for the weekend –
FULLY PAID FOR INCLUDING THE AIR BnB. 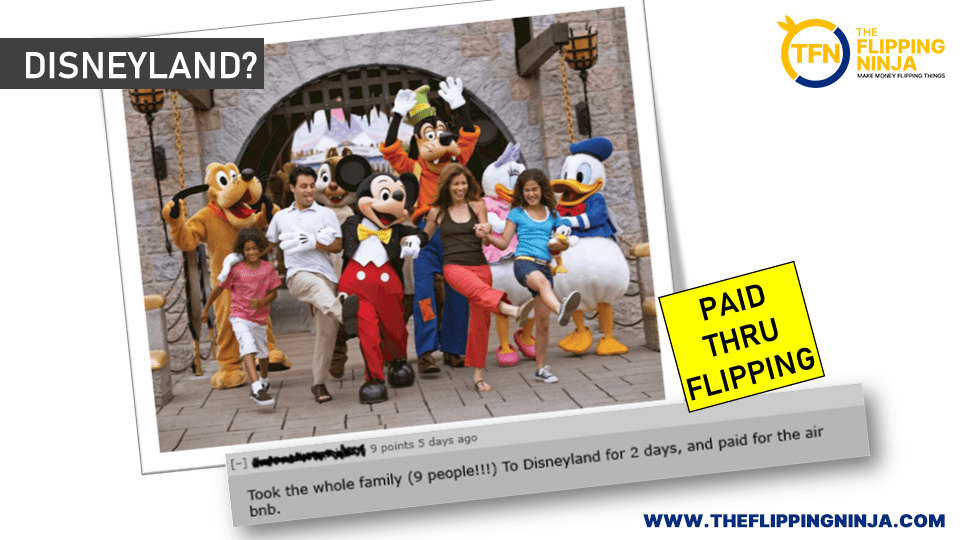 Imagine 2 flips… 3 flips and BAM – fully paid for trip to DisneyLand. No expenses whatsoever. Rides. Food. Candy. All of it.

And when you get home it’s not some huge burdensome debt on your CC – because you’ve already paid for it – BECAUSE you learned this wonderful skill set.

These aren’t anything unusual or outta the ordinary – these are normal everyday results we get, we see, and we PREACH.

You can see if you did even just one or two flips ALONE, that could completely change your life and your income, couldn’t it?
(say yes)

Do you think it’d be a good idea to do this the first chance you got?
(say yes again)

And wouldn’t you agree that flipping is THE way to go when it comes to making ridiculous… stupid amounts of cash quickly?
(heck yeah)

I spent about 5 minutes jumping on Craigslist and stumbling upon this keyboard listing.

I made a buying decision right away (because I know I could sell it for WAYYYYYYY more — almost triple!)

Went to grab it, took it home, took pics, enhanced them, crafted a solid ad description, and posted it on Craigslist and Facebook MarketPlace (local selling channels for an item like this keyboard, since I knew it’d go fast once my ad was up and doing its thangggg :) : ~60 minutes

The Ratings Are In!!!
Rating Criteria

Piece of cake. Loaded up my car with everything, no biggie. Wasn’t like some bulky piece of furniture or anything. Everything in this “package” could be individually placed/separated/spread apart/fit into the car. 5/5

Honestly… considering the fact that I was literally just chilling in bed on my phone when I saw this and it all took just 60 minutes… it was a fun flip. I like these kinds of fast, high-profit flips. Ya see it, ya get up outta bed, go flip the item quick, make some serious cash, then go back to bed and be a lazy bum again. Hey, if you’re gonna be lazy, at least do it right ;) 5 Stars on time spent 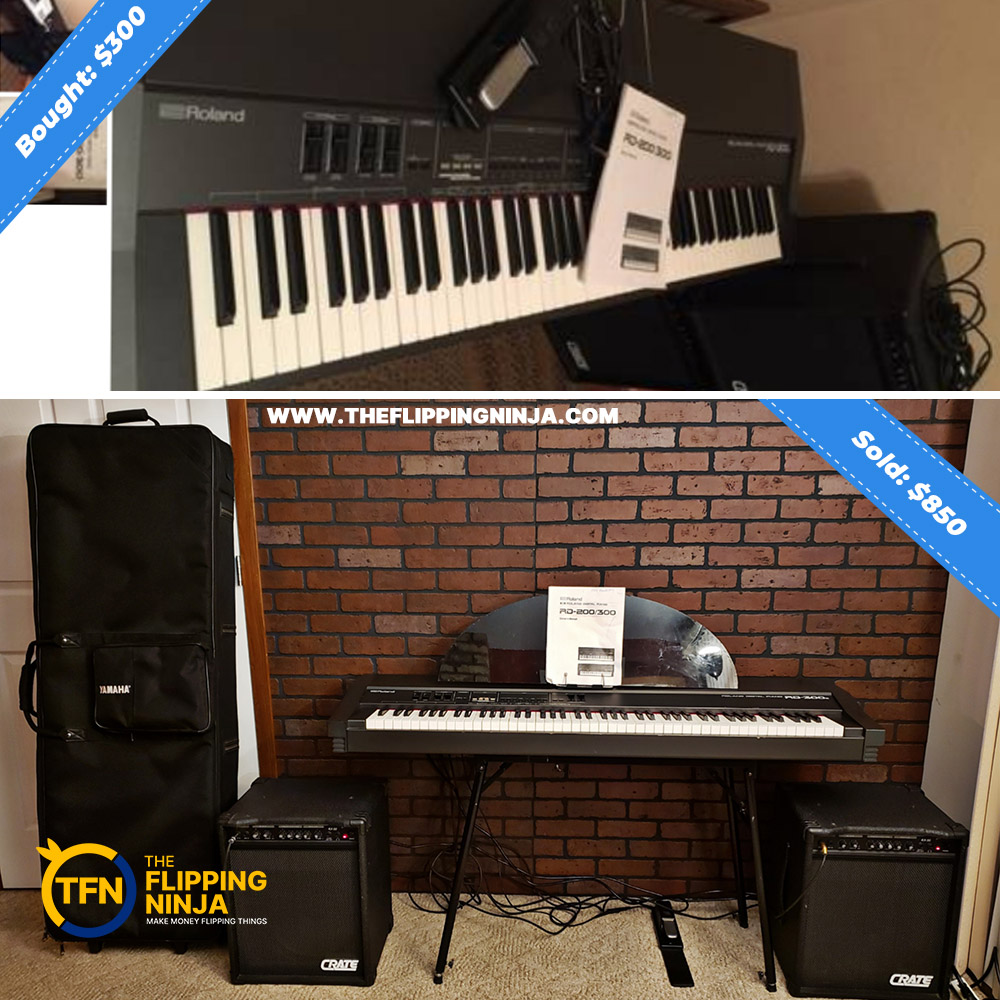 Overall I’d give it a 5/5 considering these factors: