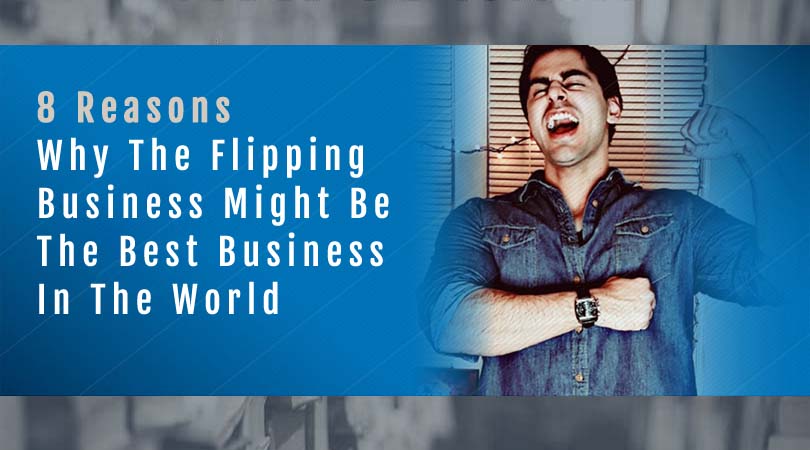 If someone put a gun to my head and said “Give me the 8 best reasons why the flipping business is the best”, here’s what I’d say.

You don’t have to quit your day job to make lots of money. For a very long time as I got good with flipping, I kept my $60,000 a year day-job. I was making almost six figures (and I was only spending a few hours per week flipping things). This gives you a second income stream that lets you pay off debt, fund vacations, and… whatever you want really. It’s extra money.

Incredibly huge profit margins. One man’s junk is another man’s treasure, as they say. Once you learn the ins and outs of this, you can monetize the heck out of it. Once you learn how to flip on a small scale, it doesn’t take much more to flip on a LARGE scale (cars, even houses if you wish). The rules stay the same, so learn it once and you’re set for life.

You can work from pretty much anywhere you wish. The skill sets you develop are universal – meaning it’s not something that requires you to be stuck in a cubical working for someone else to be successful. You could make a killing flipping things today in Chicago, then fly out to Los Angeles the next day and do the same thing. You can run your business anywhere there are people.

You can make thousands of dollars, or even a great living with only a few hours a week if you wanted to. When you start making $200 or $500 in an hour, you’ll start to see the power of your time (and you’re essentially “buying” yourself time)

No need for employees. This is a business that lets you run the whole show yourself if you wanted to, completely on your own terms. No headaches or hassles. On the other hand, if you WANT to expand and ‘automate’ your flipping business, you also have the option to do so by hiring out people like movers, ad posters, and etc. You can even train them to perform certain tasks that you’ve learned for maximum profits – essentially cloning yourself. I have 2 movers on-call whenever I need moving help – but that’s it. You can easily find moving help via Craigslist.

You can start with ZERO DOLLARS. You don’t need money to start making money in the flipping business. All you need is energy, time, a computer, and transportation. You don’t need a factory or even a store front because you can run your business right out of home if you wanted to. I actually started in the living room of my 1-bedroom apartment.

​You will only get better and better. The skill set of flipping things is a lot like learning how to ride a bike. You get on, you struggle at first, it gets easier and easier, and then eventually, if you DO stick to it, you’ll be able to take off your training wheels and ride as if you’ve been riding your whole life people would think.

Just like you learned how to ride a bike effortlessly and flawlessly and you became one with it, you’re also gonna become one with your ability to attract deals everywhere you go and make cold cash – completely on your own. It’s gonna be a part of you.

The flipping business is one of the only businesses where it doesn’t matter if you’re an introvert, extrovert, or even a little bit of both. A lot of people don’t like selling. They think you need to be some type of high energy, obnoxious “sales type”. But in this business – if you truly wanted to you don’t even have to deal with people face-to-face – not just that – they’re buying something they already want from you.

The Flipping Ninja Blueprint is designed to teach by theory AND example – so it ain’t just a book you read and you’re done. With every new technique or concept I introduce, I provide several concrete real world examples of it in action. You’ll get audio and video footage of me doing deals, buying, selling, complete scripts, showing you where to go, what to buy, how to sell, WHERE to sell, and so much more.